Research Project on Phages Expands with Grant from Trout Unlimited 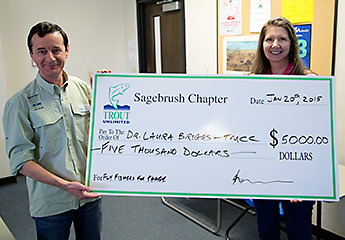 A study on bacteriophages which began at Truckee Meadows Community College in August has already produced results, with student scientists finding five previously unknown phages, and the research is now expanding.

TMCC students will add information about the new bacteriophages they have found into a national database, and are given credit for their discovery.

A phage, also known as a bacteriophage, is a virus that can infect or kill bacteria. Studying them can lead to breakthroughs in treating bacteria that are harmful to humans and other animals.

Eight U.S. colleges and universities, including TMCC, were accepted for this academic year into the Howard Hughes Medical Institute Science Education Alliance PHAGES project. TMCC was the only community college chosen for this year’s study cohort.

“It’s the experience of pure science going into the spring semester of bioinformatics,” said Dr. Julie Ellsworth, Professor of Biology. “Even though a smaller group is continuing into the bioinformatics section, it is a good proportion, keeping in mind that it is a less exciting, but important scientific process.”

Bacteriophages isolated and photographed with an electron microscope are:

Cueylyss and Apple Tree 2 have been successfully mapped by high-quality genetic sequencing.

During Spring Semester, two research class sections are being offered; one in the bioinformatics section, where students complete the work done in the Fall, and one new biological collection and isolation section.

The Study Is Now Expanding To Water, and Phages Affecting Bacteria Harmful To Fish

“What has spun out of this is an idea to expand the exploration – looking for phages in regional waterways, for the purpose of treating bacterial infections in fish at hatcheries,” Briggs said. “So we approached the local, Northern Nevada, Sagebrush Chapter of Trout Unlimited in seeking a research grant.”

The official title of the grant application is the Sagebrush Chapter of TU - Conservation Grant Program, “Fly Fishers for Phage.” Other partners in the grant include the Nevada System of Higher Education (NSHE), Nevada NASA Space grant, NV INBRE, and the HHMI Science Education Alliance.

Studying phages that infect bacteria harmful to cold water fish may be even more appropriate at a time of drought. When water is lower, there are more bacteria – but there are also more bacteriophages, Briggs said. Cold water is a disease name, and it is caused by the bacterium Flavobacterium psychrophilum.

“We will put together a kit to help with water sample collection,” Ellsworth said. “Then comes the hard work of concentrating the phage in the sample, filtering and capturing it out of the collected water. It’s a fair amount of work to get a pure sample of phage.”

There is 30 percent chance of finding phage in a soil sample. For water, the odds are as low as five percent, said Briggs. She said that biology student researchers will need to figure out the best way to sample the water for optimal phage collection.

Another facet of biology research at TMCC could include tracking the water temperature and turbidity of the region’s lakes and streams, said Ellsworth. Recording data about the warmth and clarity of waterways would be helpful in other studies.

“This research has the potential to impact fisheries across the country,” according to the grant summary.

Additional Research Opportunities Are Made Possible Through Grants, Including Nevada NASA Space Grant

Other grants, such as the Nevada NASA Space Grant, provide more opportunities for scientific research by students.

The full name of Nevada’s NASA space grant is “A Community College Partnership Creating a Community of Practice Model to Engage and Retain Minority Students.” Through this grant, College of Southern Nevada (CSN) and NSHE have set up research opportunities for community colleges.

Biology students at TMCC will connect via teleconference once a month with the students at CSN that are participating in a community of practice science program there. Great Basin College (GBC) and Western Nevada College (WNC) will also participate. Discussions, group activities and guest speakers are planned.

Students interested in a STEM major (science, technology, engineering and math), are advised to apply for these special scholarships during spring and summer, Ellsworth said.

A National Institutes of Health (NIH) grant is also going on to bring more science to the Summer Bridge program, and research opportunities in biology classes, or as independent studies, said Ellsworth. Funding sources are set up so that needed equipment is provided for students.

“The Nevada IDeA Network of Biomedical Research Excellence INBRE from National Institues of Health (NIH) is the stopgap for the other funding sources, such as NASA and TU,” Ellsworth said. “The students get their feet wet in real research and tend to then continue on in science.”

For more information about research at TMCC, call the Biology Department at 775-673-8251.