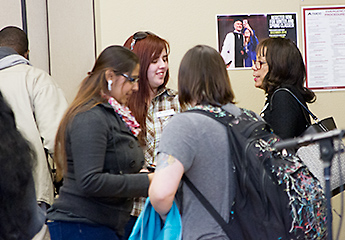 Elections will be held in March for Student Government Association representatives, and for the moniker of a new College mascot at Truckee Meadows Community College.

Students may vote online from 8 a.m. on March 30 until 5 p.m. on April 10, using their student ID to log on to the SGA website.

“This year, we’re voting for two weeks instead of one week, and students may vote online from any computer, not just on campus,” said Nicole Shimabuku, Coordinator, Student Activities and Leadership.

Shimabuku notes that participation in elections is important because a portion of student fees, 50 cents per credit, goes toward the annual $85,000 SGA budget. Executive officers will earn $4,000 per academic year, and senators make $1,920. The Activities Chair has recently had a raise to $2,400 resulting from an increase to 10 hours per week for the academic year.

There are advantages to taking part as an SGA candidate, as well.

“There’s a potential to do more public speaking, to have leadership opportunities and more professional committee-type interaction with faculty and staff,” Shimabuku said.

TMCC’s lizard logo was voted on and chosen during the 2013-2014 academic year. The winning design was created by graphic communications student, Dallas Avery Jones. A costume was developed based on the logo, and the mascot has already been making appearances around campus.

There have been 82 name suggestions, such as “Sageosaurus,” submitted to date. Members of the campus community, including students, instructors and staff, have contributed ideas.

SGA, along with TMCC President’s Cabinet, will vet the names and narrow the field to about five choices for which students may vote. Following the official election, SGA and the Cabinet will make the final decision based on results of the vote and how they would like the mascot’s name to best symbolize the College’s spirit, Shimabuku said.

Student government candidates will attend workshops on Feb. 26-27 about election policies. Shimabuku and Ralph McMullen, SGA Elections Committee Chair will brief contenders on election processes and rules. Tony Futia, who oversees the Office of Student Conduct, will also speak to the candidates.

Biographies and pictures of those running will be posted on the SGA website in mid-March.

A new event, the Candidate Fair, will take place on Wednesday, March 25 in the V. James Eardley Student Center, from 10 a.m.-noon.

Each candidate will host a table, along with the promotional materials they have created. The TMCC community will have an opportunity to meet them in a casual setting and ask questions about their goals and aspirations.

A Candidate Debate and Q & A will be held on Thursday, March 26, from 10 a.m.-noon in the student center.

TMCC Student Participation at SGA Events Is Now Being Measured

“Officers have started to track student participation in SGA activities,” Shimabuku said. “The Activities Chair reports the numbers at SGA meetings after she has them tallied for an event.”