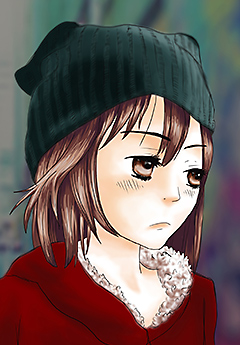 Inspired visual approaches to the nation’s homegrown topics of liberty, printing and American history are shown in the galleries at Truckee Meadows Community College from Feb. 1-Mar. 25.

A student artist’s innovative images of manga, or graphic novel, will also be on exhibit. All events and shows are free and open to the public.

"The Blessings of Liberty" by Jennifer Graham. Embracing the history of the sewing arts as a form of storytelling, recording family history, and sometimes propaganda, her work uses traditional embroidery and patchwork techniques to both reinvestigate American history and discuss current political and social issues.

Jennifer Graham received her Bachelor’s Degree in Photography and Art History from the University of Nevada, Reno. As dark rooms began to disappear and photography became primarily a digital medium, Jen began to explore other mediums that were more hands on. Inspired by her mother, who was an avid sewer and quilt maker, she began to experiment with fabric and sewing. Her first major fiber arts project involved embroidering a portrait of every past president of the United States.

She continues to work along this same path, using traditional embroidery and patchwork techniques to both reinvestigate American history and discuss current political and social issues.

"Words + Images: Broadsides from the Black Rock Press", featuring 34 broadsides produced at the Black Rock Press at the University of Nevada, Reno using the letterpress process with handset type and relief plates. The printing was done on a Vandercook cylinder proofing press. Letterpress broadsides are created for numerous reasons, frequently to honor a visiting writer at a campus event.

The Press has produced broadsides to honor university residencies by U.S. Poets Laureate Robert Pinsky and Billy Collins. Several broadsides were printed in conjunction with a national poetry broadside competition held in the 1990s; winning poets received cash awards and had their poems printed as broadsides.

In recent years, broadsides have been produced for the Robert Laxalt Distinguished Writers Award, presented annually by the university’s Reynolds School of Journalism. Broadside writers include:

"Words + Images: Broadsides from the Black Rock Press", is part of the Nevada Touring Initiative–Traveling Exhibition Program. It was funded in part by the National Endowment for the Arts, the Nevada Humanities, and the Nevada State Legislature and an anonymous donor. The Nevada Arts Council is a division of the Department of Tourism and Cultural Affairs.

The art pieces in his art exhibit represent the different characters that he is wanting to include in his manga. They each have their own background stories included in the exhibition. These images will be created using a variety of mediums, but will mostly consist of pen and ink along with digital painting/inking.

"Selections from U.S. History Portfolio I,II (1774-1844)" organized by Brandon Gardner. The History of the United States Portfolio is comprised of different printmaking techniques and mediums. It is an exploration of our country’s history year by year. Each participant has researched and created a work of art based upon a randomly assigned year and printed an edition of 40.

The Meadowood Center will feature "Under Pressure", Student Printmaking at TMCC.

The Meadowood Center Galleries and the Veterans Upward Bound Gallery are located at 5270 Neil Road, Reno, and are open according to building hours.