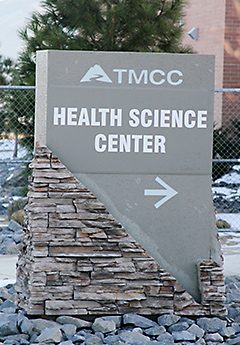 The TMCC Health Science Center will include a 16,800 square-foot expansion, and is estimated to be completed by Fall 2015.

Truckee Meadows Community College, with five site locations in Northern Nevada, has updated the name of one of its facilities – the High Tech Center now becomes the Health Science Center.

The Redfield Campus is a collaborative site of TMCC and the University of Nevada, Reno. Courses offered at this site include nursing, veterinary technology, general education and geothermal classes. It is located at 18600 Wedge Parkway.

On January 21, ground was broken and construction is now underway to greatly expand TMCC’s portion of the campus. Officials at the College decided that the new name of "Health Science Center" better describes the majority of programs offered by TMCC at the Redfield site.

Expansion of More Than 16,800 Square Feet

The new building enlarges the current facility from 25,000 square-feet to approximately 41,800 square-feet by connecting to the new building with an interior walkway. It will host a 4,200 square-foot nursing lab, lab storage, two classrooms, a library, student dressing room, four advanced simulation rooms and two meeting rooms. Another benefit of the expanded facility is consolidation of all nursing classes under one roof, instead of split between two campus locations.

An animation video of the new TMCC Health Science Center expansion can be viewed from a link on the TMCC Facilities Operations and Capital Planning's Web page. More information can be found by contacting TMCC Facilities at 775-673-7100.