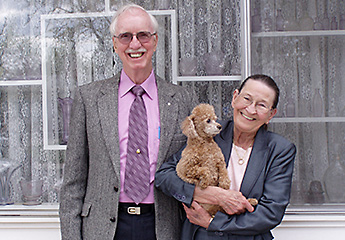 The daughter of a Missouri sharecropper with her happy, intelligent and plucky spirit, has inspired a new scholarship for students at Truckee Meadows Community College.

The Tackett Family Endowment is a generous gift given to TMCC Foundation in honor of Peggy Tackett, and will continue the family’s legacy in the eyes of motivated students seeking to better their lives through higher education.

Because Peggy Tackett was an amateur painter and she also loved animals, the scholarship will be awarded to either a fine arts student or a veterinary technician major each year… in perpetuity.

A sweet and lasting story

The story begins when a U.S. Air Force airman stationed at Scott Air Force Base in Illinois wanted a date with Peggy Stafford’s cousin. The fellow wanted to have more time with his lovely date, her cousin, and so he enlisted another airman to keep Peggy, the chaperone, busy.

Peggy agreed to go on this blind double date only if the gentleman was tall and donned red hair.

The fellow airman, George Tackett, did indeed sport fiery red hair, and was called "Red." He and Peggy had a wonderful time getting to know each other. Both couples eventually married. The four remained lifelong friends, keeping in touch as their close bond developed across time and distance. Peggy and George were married 61 years before her death, and raised two daughters and a son.

One of George’s favorite stories about Peggy is that she was an accomplished singer and would have loved to be an opera singer, but he said in a lighthearted way that her frame was much too petite to choose this particular career, belting out classical arias.

The pair moved to the Reno/Sparks area after George was discharged from the USAF.

George Tackett is an alumnus of TMCC and has been inspired to give back to his favorite college, said Robyn Powers, Interim Executive Director of the TMCC Foundation.

"Mr. Tackett is a big supporter of TMCC," Powers said. "He advocates for the college at the Rotary Club and in the community."

"An education at TMCC opened the world of learning to him," said Rebecca Josten, Executive Assistant. "He is still learning new things every day in exercise class, and he is active in the Connectors, a NV Energy ‘alumni’ retiree group. Mr. Tackett is involved in Rotary events and regularly attends TMCC Legacy Scholarship dinner events."

Peggy loved shopping and she also collected a colorful assortment of shoes. Now, students awarded a scholarship in her memory can walk across the stage in their own dress shoes on graduation day in her honor.

The first scholarship will be awarded for the 2015 Fall Semester. One veterinary technology or fine arts student will be chosen to receive the award each year, as the endowment has been set up that the interest will support this scholarship for future generations.

Students applying for the scholarship may be full time or part time, and must maintain a 2.0 GPA. If equally qualified candidates are applying, preference is to be given to a student with a financial need. The scholarship is given for tuition and fees.

More information on this scholarship or others can be found at scholarships.tmcc.edu.